See our favourite wireless mice available now and learn what makes them such great buys!

See Best ProductsLearn About The Tech

Cordless mice have come a long way since the first few hit the market in 1991. Logitech’s MouseMan started the slow burn towards dropping wires – and today we all still pay more for the convenience of going wire free!

Let’s take a look at some of the best on the market, and why you’ll want to look at these ahead of some lesser alternatives on sale in the stores and online.

When you’re considering such a vast number of products, it’s good to narrow down your search to a few top performers to make your choice. Here’s some of my favourites, along with a short guide to why I like them. 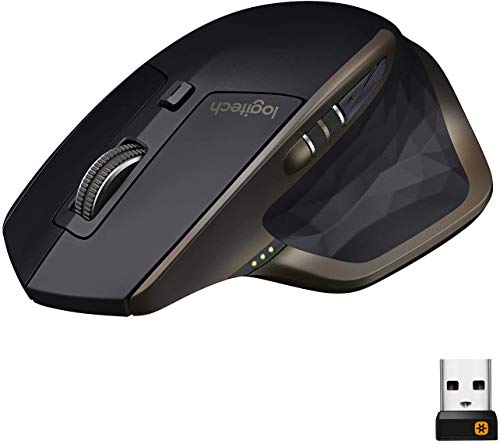 Let’s open proceedings with this premium offering from Logitech. It’s actually a rebadged version of the first incarnation of Logitech’s MX Master, so avoid comparing it directly if you’ve seen the MX Master 2 on sale. This version comes at a better price point and is unlikely to lack anything of notable substance to justify the increased cost of version 2.

Where this mouse really shines is the ability to run over either bluetooth or its included wireless dongle, giving you the best of both worlds. What’s more, the mouse contains a rechargeable battery. That will mean you get away from the cost of replacing batteries, and even when it runs flat you can use it while it charges connected to the computer’s USB port. A simple five or six minute charge will keep you going for several hours, so if you’re needing to remain wireless it won’t take long to get back up and running!

If you’re interested, this is also available as part of a keyboard and mouse bundle too: 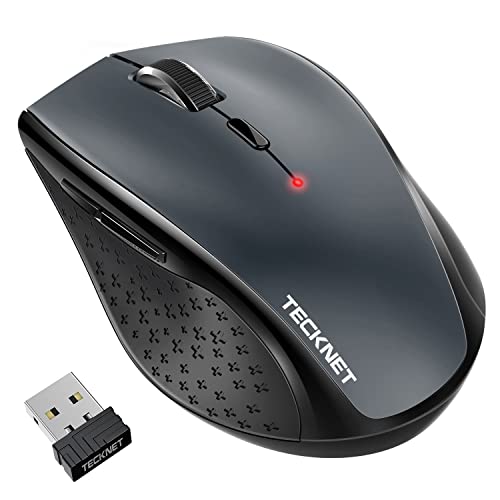 Having started with our preferred premium choice, we wanted to give a budget option next. At around a fifth of the price of the Logitech mouse above, the Tecknet operates via a USB dongle that you plug into a free USB port. It’s not a model that supports bluetooth, so the dongle is mandatory, even if your computer has built in bluetooth support.

While the pictured model is grey, there are five colours available in total with black, red, blue and purple completing the set. The colour is purely aesthetic, it has no bearing on the features or the operation of the device at all.

As a device that’s been tested with versions of Windows back to the 2000 edition, this will work fine for almost all PC users running Microsoft operating systems. In addition it works with Mac computers too, although some of the extra buttons won’t perform any functions on Apple computers.

If you’re after a cheap mouse but know the perils of being too cheap, this is a reasonable choice for a low price. 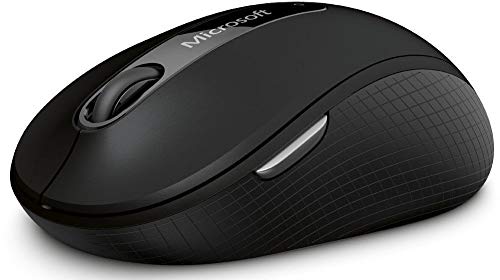 If you’ve either got small hands or want a small mouse to use that doesn’t take up too much space on the move, this Microsoft mouse will fit the bill perfectly. It will also fit the bill nicely if you like to buy a trusted brand – so can be sure this will work well with Windows.

The manufacturer claims this boasts a ten month battery life. Typically you get a little less than claimed with most products, but that should still give you at least six months between battery swaps.

You’re unlikely to want this mouse if you’re a heavy user though, so if you want to spend less than the Logitech above, there’s another up next that may suit you better.

As for the Microsoft mobile mouse though, you can check out current pricing here: 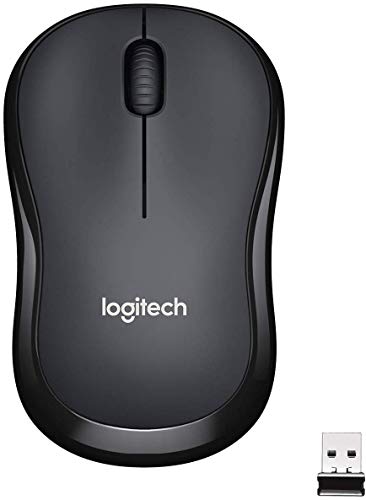 Here’s another great offering from Logitech, offering a really good quality no frills mouse that’s got the unique feature of being ambidextrous. If you’ve got a mix of left and right handers using your computer, the combination of ambidextrous and wireless is a real winner.

Many left handed people have to just accept they need to struggle through with a right handed mouse, but no more with this genius solution!

The silent element of the name refers to the fact that it’s really quiet to use. Silent is probably stretching it a little, but is is significantly less clear to hear the mouse click or scroll wheel spin, even though there’s a clear feeling in your fingers to both actions.

While this isn’t in the same league as the MX Master AMZ above, it is very comfortable and easy to use. For people unable to justify spending more on a mouse, this will make a good full sized choice.

There are two categories of wireless mouse, and the best choice for you will vary depending on the computer (or computers) you will want to use your new purchase with.

Bluetooth varieties use a generic bluetooth connection to communicate with your computer, much like a wireless speaker might connect over bluetooth. However, not all computers have bluetooth support built in.

In the early days, bluetooth connections had a poor reputation, with lots of reports of devices refusing to connect or dropping the connection intermittently during use. Fortunately, most of these cases are now behind us and a good quality bluetooth mouse is likely to operate without issues.

If your computer doesn’t support bluetooth already, you have a choice to make. You can get a simple dongle to plug into a spare USB port, and that will essentially upgrade your computer to give it the ability to connect wirelessly to bluetooth devices. That includes lots of types of device too, not just a mouse.

Alternatively, you may which to choose a dongle based mouse, which includes a usb dongle that will only provide a connection to that device. Generally speaking, this is a good option if you have plenty of free USB ports, and have little prospect of wanting to connect other wireless devices in future. It’s also worth noting you can also buy wireless keyword and mouse sets too, and many of these will allow you to use both input devices with one usb port and dongle.

Generally, these dongle based input devices connect on a 2.4Ghz connection, which is likely to be similar to the wireless connection you use for internet. They don’t however conflict, otherwise you’d drop your internet connection every time you use your mouse!

Cast your mind back to the early days of using Microsoft Windows and you’ll most likely have used a mechanical mouse. If you’re not sure what I’m referring to, you might remember twisting a disc off the base to allow the ball to fall out and cleaning the dust and grime from the small rotating bars inside.

Today, the optical mouse is far more common than the older style mechanical versions, and these operate with a (usually red) light that’s directed from the bottom of the mouse onto the surface it sits on to detect movement.

Why I’ll Never Return To A Wired Mouse

I spend a lot of time at my desk, typing away day in day out. Anyone who uses a keyboard a lot is highly likely to use a mouse too, as there’s just too much time needed to become totally proficient with all those shortcut keys to avoid reaching for the mouse every few seconds.

The problem I have with mice, though, is all the other stuff I have on my desk too. It seems I’m blessed with really bad luck when it comes to working tidy – it’s always piles of paper, books, a precariously placed coffee mug and more surrounding the keyboard.

The mouse however needs space and tidiness. To work properly it needs enough clearance to move the pointer around the whole screen, but it’s more than that too. It also needs not to have its cable pinned to the desk by clutter, otherwise that coffee will tip into my keyboard with incredible precision.

That’s what lead me to switch to a bluetooth alternative. The wireless mouse solves half the problem (and the more likely half to cause spillages). It means I just need to keep space to move the pointer on the screen, which is much more manageable in my desk of chaos that worrying about wires too.

Don’t get me wrong, I’m a big fan of wireless keyboards too – in fact my current one works on the same wireless dongle as the mouse, but I don’t need to move the keyboard like the mouse, so it isn’t fraught with the same productivity killers in spilling coffee.

On this site, I’m going to share not only my thoughts about the world of wireless mice, but also the cord free bliss of other owners too, relating to a huge range of possible wireless mouse purchases. Who better to listen to that the reviews coming from people who use these wonderful devices every day (and get to enjoy a whole cup of coffee the way it was intended)?